Our partner A. Falkenberg Etft. AS from Norway, celebrated their 125. anniversary in October 2017. In honor of this occasion, Falkenberg organized a four-day long in-house trade fair in Norway. Of course Compass Software was there to celebrate Falkenberg. Our CEO Detlef Hollinderbaeumer and Sales Representative Martin Stockhausen were only two of the approx. 70-80 visitors that came to the trade fair each day. 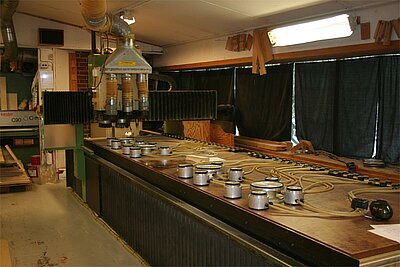 At the fair, Detlef and Martin had a chance to meet our first machine-customer from Norway (and also outside of Germany), the owner of Meisland Trapp AS, Oddvar, Meisland (1. picture on the left: right Tjark Busch, Service Technician at Falkenberg and left Oddvar Meisland, CEO of Meisland Stairs). Meisland came to Compass Software through Falkenberg in 1985 and was the first customer of the then called Compass GmbH in Norway. The CNC machine that was set up was a brand new technology in 1985 and it is still being operated and used as a backup machine in the woodshop today (see picture below). The company also operates another modern processing center with Compass Software and plans to expand even further. We are thrilled that we were able to celebrate Falkenberg on their Anniversary Trade Fair and we are confidently looking ahead onto the next 30 years of partnership and friendship with Falkenberg. Congratulations!